At the L.A. Times Festival of Books held April 21 and 22 on the USC campus, I was at the author table at the Philippine Expressions Bookshop booth for two hours each on Saturday and Sunday. 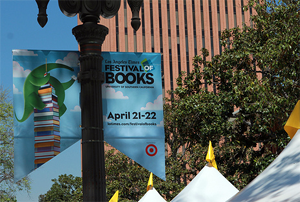 The rest of the time was mine to visit other booths, laze in the sun and listen to music at one of the outdoor stages, and enjoy an assortment of panel discussions.

I attended three panels on Saturday and one on Sunday. The first was moderated by Laurie Muchnick, an editor for Muse, who started off by asking each of the panelist powerhouses—Jonathan Evison, Anthony Giardina, Lauren Groff, and Chad Harbach—how their work related to the title of the session, The Big Picture. At first, all but the scene-stealing Evison seemed stumped by the question. Evison regaled with a high-speed volubility that made frequent references to beer. It became a running joke among the other panelists that none of them wanted to follow Evison at the microphone.

At one point, the discussion turned to book cover designs, a topic about which Groff was fervent. She pointed out that book covers for fiction written by women often depict a woman’s torso, a woman’s legs, or a female figure running in a meadow, all of which she vociferously objects to for her books. While it was acknowledged that most readers of fiction are women, Groff remarked that 80 percent of the email she has received from readers of her latest novel Arcadia has been from men. Before she could make the connection to this and the fact that her protagonist was a male, Evison interjected that her author photo was “pretty hot,” which sent Groff ducking for cover under the table drapery. Other than this brief discomposure at having her looks become the focus of a discussion on books, she was poised and articulate, exhibiting the intelligence that brands her writing and earns her a big place in the literary picture.

Next I attended a panel called Loose Ends that consisted of Eleanor Henderson, Seth Greenland, Josh Rolnick, and Jervey Tervalon. Again, the panelists all seemed to be mystified as to why they had been placed in a session on Loose Ends. While they did a fine job in responding to discussion prompts, it was the very extroverted moderator Rachel Resnick who made the largest impression with her take-charge attitude and clever quips and asides. In the end, the highlight of this session for me was being a winner in the random drawing for a book by one of the panelists. I won Rolnick’s story collection Pulp and Paper. Curiously, two individually wrapped Purell sanitizing wipes were part of this prize package. Rolnick did not explain the connection and the stories that I’ve read so far in his collection offer no clue and leave me at loose ends.

The best of the three panels I attended on Saturday featured Krys Lee, Samuel Park, and Leonard Chang. Because the authors are all Korean-American, the moderator Patt Morrison of the L.A. Times did not have to spend any time in eliciting from them why they thought they were selected for a panel titled Echoes of Korea. The success of a panel depends as much on the moderator as it does on the authors, and much credit goes to Patt Morrison for the fluidity and depth of discussion. Beneath a flamboyantly pink hat, Morrison asked insightful questions that, in turn, provoked thoughtful, insightful comments from the authors. While it was obvious why these three writers were grouped on a panel, the discussion made clear that within a shared heritage, there exist particular experiences and, therefore, unique work that must be considered individually and not lumped into a category. Lee was brilliant and eloquent as she spoke about politics as a force in the daily lives of Koreans, Park was wry and affable as he noted that his biggest fans are women in their sixties and seventies, and the reflective and cerebral Chang didn’t hesitate when he answered “me and maybe my mother” to the question Who do you write for? Through their relaxed, yet earnest, conversation, they made me want to read their books.

The panel I attended on Sunday was called The Dream Deferred and once again the panelists—Ayad Akhtar, Mona Simpson, Hector Tobar, and Jesmyn Ward—at first were a bit flummoxed by the name. Moderator Joy Press was almost apologetic, “None of us are quite sure what it means.” Eventually, they seemed to approach some kind of understanding through a discussion regarding the genesis for their novels. For Ward, it was a desire to write a story about a girl growing up in a world full of men and how that world was affected by Hurricane Katrina. Tabor’s source for his novels is class origin, a concern that stems from his Guatemalan background. Akhtar wanted to explore the religious experience in America from the perspective of a Muslim boy. Simpson described her experience befriending a Filipina nanny when she herself was a mother of two young children in L.A. Tobar summed up by noting that what the work of the four writers had in common was bringing outside characters to the forefront of American life in literature.

Here’s one last observation about the panels. In three of the four I attended, aside from the female moderator, there was only one woman on the panel. It made me curious about the representation of women compared to that of men on the panels. I marked up my program, tallying the men and women on each of the 22 pages listing the festival authors, which included moderators. Okay, so the disparity was not that great: 311 men to 250 women. However, since the moderator at each of the four panels I attended was a woman, it would be interesting to delve further to determine the percentage of male and female moderators. Is the near parity of men and women overall due to the number of female moderators? I leave the count to someone who is not on a deadline to write an RFP at her day job.

Flamboyant pink hats and preconceived notions—As someone who favors neutral colors and blending into the woodwork, I admit Patt Morrison’s flamboyant pink hat struck me as somewhat over the top. However, what was even more striking was that underneath a big, kitschy hat may lie a formidable brain such as Morrison’s.

The beauty of Lauren Groff—Groff is blessed with good looks, but I’m betting she’d prefer that attention be focused on her accomplishments—the beauty of Delicate Edible Birds, for instance.

Mona Simpson’s Filipina nanny—It’s nice that a Filipina nanny is a main character in Simpson’s 2010 novel My Hollywood. She pointed out that she took great pains with the character and voice. Many readers found the Filipina character to be engaging and authentic. I hope they and others will also be inspired to read novels populated entirely by Filipino or Filipino-American families, such as Leche by R. Zamora Linmark, Monstress by Lysley Tenorio, and (yes, dammit, why not) When the de la Cruz Family Danced by me.

One thought on “The Big Picture, Loose Ends, and the Dream Deferred at the L.A. Times Festival of Books”