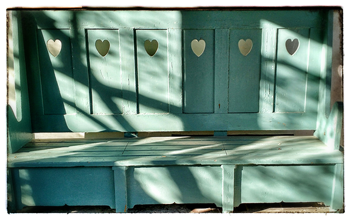 Among the pleasures of an artist residency are the artists you meet there. During my recent Ragdale residency, I landed among a most congenial and talented bunch. It was great learning about and from them. If you don’t already know these artists, let me introduce you to them.

Virginia Bell—Poet and author of From the Belly (Sibling Rivalry Press, 2012)

Articulate with a formidable breadth of knowledge, this is a woman whose intellect might scare me if I were still at an age when such things scared me. Now I’m just duly impressed. She’s writing a fascinating memoir that involves repression and pets. Okay, that’s a deliberately gross simplification that doesn’t do justice to the nuanced emotional complexity of the work. I just don’t want to give anything away. Know that it’s sure to be a stunner, judging by her poetry. Also that Bloomsbury sounding name of hers gives instant cred. And she looks good in a hat.

This exuberant young woman had the best dinner time stories, one of which I have permission to use in some future fiction of mine so will not describe the story here lest you take it for yourself. Suffice it to say, the story has an entomological inspiration and great potential to exploit all five senses and possibly a sixth one as well. A writer and visual artist, Lauren delighted us with both talents. She also exhibited great balance on the Ragdale prairie where she performed handstands in full view of perplexed deer bystanders.

I vote her Most Radiant. Her face and personality beam with goodwill and generosity. She’s a travel writer who has recently also turned to fiction. She’s writing a novel based on a captivating personal experience. Again, not to give anything away, I’ll just throw it out there that there are nuns in parts of it. Jeff O’Neal at Book Riot says about his fascination for novels with nuns (and priests): I think it is the dual forces of constraint and passion that hook me. Same goes for me, and from the excerpts Christine read to us at Ragdale, its’ clear that she’s handling these forces with deft and grace.

Michael Remson—Composer whose next opera will premiere in June.

He attended his first opera and his first rock concert at age nine as nine-year-olds are wont to do. He also developed an early enthusiasm for old radio shows. He would lie under the dining room table listening to his father’s collection of recordings. This early grasp of words, story, music, and performance—how could they not culminate in a career as a composer and librettist? I like to picture this grown man even today lying on the floor, eyes closed, his whole being attuned to inspiration, then madly creating art, before taking a break to make a sandwich with a dollop of the Shur Good mustard that was a Ragdale kitchen staple.

Responsible for the term jackhammer being employed with frequency during dinner conversations, Chris also used her literary license to coin new words as in “he was brighting me.” I know. It makes you wonder whether our dinner talk was suitable for all ages. I assure you, it was. Only a deviant would think otherwise. Anyway, how could anyone attribute any but the most inoffensive to the innocently impish facial expressions that accompanied her word inventions? Invention serves Chris well in the dystopian novel she’s working on. I’m inspired to coin a new word to describe the story and characters: captismatic.

This remarkable woman published her first book this year at age 72. It’s called Smoking Cigarettes, Eating Glass: A Psychologist’s Memoir. In addition to this highly praised book, which won the Santa Fe Writer’s Project Grand Prize, she wrote a bewitching piece of fiction that she shared with us during residency. I often ate my oatmeal with sliced bananas while she ate her toast with peanut butter and honey in the Ragdale kitchen. Sometimes we talked. Sometimes we read—her a book of essays, me a book of fiction. Either way, it was a pleasure starting my day in the company of this woman.

We only had Emily’s genial company for a week. At dinner one night she revealed her Jane Smiley crush. So here’s a Jane Smiley quote, and if you’re an artist other than a writer, just replace book with the art you produce and reader with your particular audience.

“…all you really need to have for your book: just one reader out there who loves it.”

Finally, many thanks to the Ragdale staff, several of whom are artists. A special shout-out to Resident Liaison Eddie Morfin for sharing his work-in-progress with us and for considering us “sort of interesting.”