It might be an addiction—the Port Townsend Writers’ Conference. For six of the last seven years I’ve gone.

Before I started the run at the PT conference, I’d been to others and enjoyed them all—Squaw Valley, Napa Valley, VONA, Bread Loaf. Two summers ago I attended the Taos Summer Writers Conference. I loved that one, too.

But there’s magic at Fort Worden where the PT conference is held. And ghosts. And pie.

Here are the magic parts: 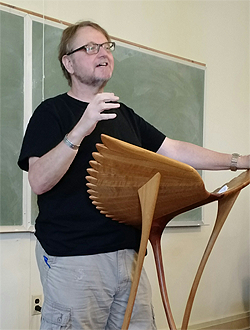 This year the magic was boosted beyond normal by Luis Urrea. You could tell who his workshop students were by the look of awe they wore in the dining hall at lunchtime. The rest of us had a chance to be awed during his reading one evening and later in the week at his craft lecture. The man enchants, and I’m proud to be called his homie, sharing as we do a connection to National City, CA.

The fiction workshop I was in had its own brand of magic. Pam Houston—great storyteller, astute reader of student work, compassionate and generous conveyor of feedback—led our workshop of all women. That’s right, no men in the class. In my experience at writing conferences, women far outnumber the men, just as they outnumber them as readers and buyers of books. Funny, though (by which I mean not funny at all), that men far outnumber women in being published, reviewed, and lauded.

Not that it solves the problem, but good thing there’s pie—gorgeous, delicious fruit pies. Pie and Whiskey Night is made possible by the pie-making skills of poet/pie maven Kate Lebo and fiction faculty and incoming conference artistic director Sam Ligon. This year I took a beautiful slice of blueberry pie and sat next to Pam Houston (because, you know, Pam Houston!!!). When I saw her leave part of her pie crust on her plate, I blurted, “You gonna eat that?”

So I did. I ate Pam Houston’s pie crust.

I felt no shame. That pie will make you say and do anything. Or blame it on the ghosts. The buzz is that they wander the dorms, the monastic, functional cells once occupied by soldiers when the fort was an active military base and later by wayward youths when it became a detention facility for juveniles. Ghosts are also said to occupy the schoolhouse where the writing workshops are held and even drift with the morning fog along the beaches and bluffs, and in the treetops in the woods. They’re integral to the spirit of the place, so to speak.

So next year sign up for some ghosts and pie and magic at the Port Townsend Writers Conference.

Posted in Events, On Writing, People