Like many of you, I have stacks of to-read books. Often, I’m reading more than one at a time. When I finish one, I might remember to add it to my Goodreads list. Once in a while, I feel organized enough to jot down a few thoughts about a book or three—such as these I recently read. I also contacted each author and asked a single question about her book or her writing in general. Each came back with a thoughtful, beautifully articulated response. 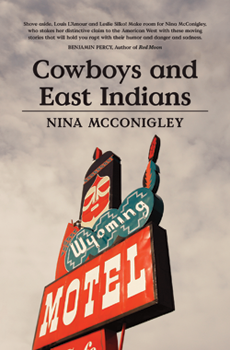 This is a skillful and perceptive collection of stories. I’d previously read a couple of them when they were first published in journals, but it was a pleasure to read them again. In “Curating Your Life,” McConigley captures my own experience of being a brown American, that otherness or in-between-ness that comes with that weird dichotomy of cultural whiteness (a mostly English-speaking household, and mostly American food, TV, and music) and physical not-whiteness. When that other takes her bits and pieces of cultural ethnicity to “discover her roots” in the homeland of her parents, it’s a whole new side of otherness that is exposed.

Questions of who we are and where we belong are asked by all the characters, whether brown, white, recent immigrant or old-timer, in these stories set mostly in Wyoming. There are characters such as Delia in “Reserve Champion” and Sindu in “Dot and Feather” who try to lay claim to something even if it’s not theirs to own. In “White Wedding,” the narrator learns how to dress her dying mother in a sari, learns the art of folding it when packing it away. The Wyoming landscape—the light, the prairie, the smell of sage—is a subtly compelling presence throughout the collection.

These well-made stories are packaged in a very pretty, well-made book. A treat to hold and read, and keep on your bookshelf.

Here’s the question I asked Nina:

Kevin Wilson, the author of The Family Fang, said this about you: “Like the best writers, she knows the exact moment to let wildness rush into the story and ruin us.” I completely agree with this assessment. Can you talk about how you know that moment?

“It’s funny, but for me, I often write the end of a story first. So, I think about that ‘ruining’ moment. And then I try to go back and earn it. Sometimes, it doesn’t always work, and sometimes the ending, that moment, will change, and I will see a different outcome emerge. But for the most part, I always when thinking about a story, think of the end, what I want the reader to take away, first. It’s just always a puzzle on how to get there. Almost like knowing your destination, but then trying to figure out what route to take.

I realize this might be a backward way to write, but again for me, it weirdly works. I’m always thinking when I am writing—you have to earn that ending!” 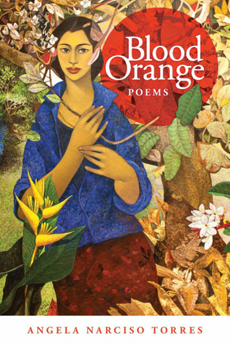 Torres’s poems in this collection deal with the elusive and the ephemeral—fleeting moments of connection that are shared and repeated among generations of a family. She describes the difficulty of letting go in “Lucky,” and the necessity of letting go in “Elegy with Roller Skates.” And then there is the impossibility of hanging on in “Thursday, After Dinner at L’amie Donia: …starting/ at the beginning doesn’t help me to remember.

In “Waiting for my Father,” a girl reflects on her place in the larger world and also her place in her father’s world as she waits for him to finish his work in a hospital lab that houses among other things, specimens of a human fetus and a microscope that reveals a hidden and complex universe of life, illness, and death.

Torres’s language is clean and fluid, the better to make her images shimmer.

In the three short poems from “Postcards from Bohol,” Torres animates postcard perfect images that poke a hole in your heart with a simple, telling movement such as when “small crabs/fine-pencil disappearing tracks” or when a starfish is abandoned by the tide “we huddle around him/our cheeks flushed with twilight.”

Here’s the question I asked Angela:

Those beautiful and sad fleeting moments between then and now, before and after—those moments that will never come again—how much are they influenced by your having lived in two countries, experienced two cultures?

“I was born in Brooklyn during the years my parents were medical residents there, then was moved back to Manila shortly after, as an infant. My older siblings brought home memories of a life in Brooklyn that I only knew through photographs or from stories my family told. So there’s a whole chapter of our family life that I can only claim by what I’ve heard. We spoke English at home and learned Tagalog in school, though my parents and extended family spoke in the native tongue to teach other. In retrospect, these disconnects (both my not having experienced the years in Brooklyn before my birth, and grappling with two languages in navigating my world) could in part explain why I grew up feeling “on the fringe of things” even in my Manila home of 23 years. I was an observer, looking in from the outside.

“Over the years I’ve found this observer stance to be very useful, as a writer. Moving to America for graduate studies as a young adult and eventually to settle only served to reinforce that stance. Among other things, it afforded me the long perspective—that backward glance that paradoxically considers more closely what was left behind. Not just the landscape, but the people, relationships, entire stages of my development. Poetry became a way to capture and preserve the sensory experiences, the moments of deep feeling, the beauty and brokenness of that lost world. As one poet said, as humans, we love what is like us—what is fragile, breakable, and will be lost. Poetry allowed me to recreate my narrative history, filling in the gaps where memory failed.

“When I started writing poetry in earnest as an adult, I was also a mother of young children. Watching them move swiftly through the ages and stages sharpened further that sense of transience, and hence, the urgency to record. Poetry provided a space where I could circumscribe a shifting sense of self and world. Writing was a way to craft, understand, and circumscribe an identity that included all the worlds I inhabited (inner and outer, homeland and adopted land, past and present). It was a pathway toward that larger world in which we come to understand what it means to be human.”

In Hunt’s collection, the natural world is ever present—in a well-tended garden, a spider web on the porch, the wind and dry hills of Wyoming, the trees and rain of the Pacific Northwest. 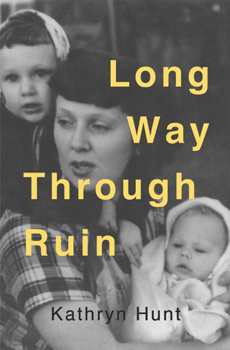 In the interstices of nature, which is sometimes indifferent, sometimes a solace, lie the sorrows and losses and joys of the human heart which Hunt exposes in powerfully subtle ways.

In one of my favorite poems in the book, “My Mother and I Drive the Oregon Coast, 1976,” mother and daughter exchange caretaking gestures:

I buttoned the top button
of her sweater,

she pulled down the bill
of my cap,

At first glance, these gestures seem simple enough, but as I read these lines, something bubbles up through the language that makes me see the “buttoning up” as a closing off and the “pulling down” as a covering up or inhibiting. Later in the poem, this sensation of a beautiful and painful opposition is confirmed when the words fury and love appear in the same line.

These poems of the complexity of family and the mysteries of landscape make you see and hear and taste. They make you hurt and they make you glad to be alive.

Here’s the question I asked Kathryn:

Your bio begins with this: Kathryn Hunt lives in Port Townsend, Washington on the coast of the Salish Sea. There’s something poetic in that line. How does living where you live create the psychological and emotional space for you to make your art?

“Douglas firs, these great expanses of water, the cold wind, my garden: They call me from my usual preoccupations and worries to return to this world, with all of its melancholy and wonder, and to meet whatever is offered, whatever is right there. That can happen anywhere, of course—on a city street, putting a child to bed, on a mountain trail—but living near the sea, for me, and having my hands in the soil, and living amid a hundred shades of green, has somehow nourished me and my work, though I’d be hard-pressed to say just how. Perhaps this place may allow me to enter the world in some way that satisfies a deep yearning for intimacy and enables me to hold and consider questions about the existence of the sacred in this appalling and gorgeous world of ours, if only because I often fall asleep to the fevered calls of coyotes and wake with the gray haze of the coast tangled in my dreams.”

Now that these books have moved off my to-read list, they are officially on my highly-recommend list. Lose (and find) yourself in language and story in these authors’ exploration of self and the world.