Blanche Ebbutt’s little book of advice was first published in 1913 in London and has since been reprinted multiple times and sold in novelty stores. It’s a tiny hardback and is literally a pocketbook, measuring 2¾ inches by 4½ inches. The title is DON’TS FOR HUSBANDS. 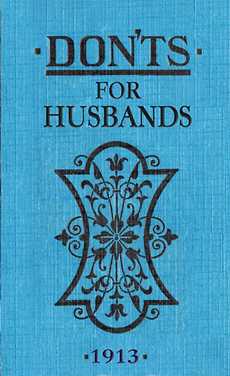 I bought the book as an anniversary gift for my husband. We’ve been married thirty-two years. We’re at the point in our marriage when we don’t wrack our brains over the perfect gift, over whether it will be sufficiently appreciated, over whether one of us (me) will be indignant because the other (him) didn’t remember that turquoise is not a flattering color. We observe these milestones by exchanging a carefully selected notecard with a handwritten sentiment and by enjoying a meal at a restaurant. And sometimes with a gift that is waggish or whimsical, such as Blanche Ebbutt’s DON’TS FOR HUSBANDS.

Having been published in 1913, Mrs. Ebbutt’s little book of advice naturally belongs to a certain era in terms of its lexicon. For instance, the following tip may seem charmingly antiquated, and yet it’s perfectly reasonable: Don’t drop cigarette ash all over the drawing room carpet. (Section I. General Habits, page 1)

Much of the advice is practical and wise and needn’t apply only to husbands nor be given to mark just anniversaries. June is always a busy month in our household because of the multiple milestones that fallen within it. Aside from our wedding anniversary, there is Father’s Day, my birthday, and our older daughter’s birthday. This year I also celebrate the one-year anniversary of the publication of my novel WHEN THE DE LA CRUZ FAMILY DANCED. As I read Mrs. Ebbutt’s little book of advice, I sought wise words that might apply to each of these occasions. It would’ve been a convenient coincidence had that happened.

Nonetheless, here are some tips that conjured, however artificial, an association with one of the June milestones I mentioned above.

Don’t omit to learn to dance as soon as you get married, if your education had been neglected before. (Section VI. Recreation and Holidays, page 54)

This one made me think of my father—for its irrelevancy. Aside from being anachronistic, this one definitely has an element of class differentiation. On the other hand, there’s a bittersweet poignancy for its very want of relevancy to my father’s life. This Father’s Day, as I thought of my father, dead nineteen years now, I remember how my father didn’t dance. Neither could he carry a tune. Not only did his education neglect such arts, it was completely cut off during the Japanese occupation of the Philippines. It wasn’t until he had a family that he earned a GED. His focus was on providing for his family and he did that very well, never letting on that perhaps he might’ve danced, if given the chance.

Don’t say your wife wastes time in reading, even if she only reads fiction. (Section VI. Recreation and Holidays, page 50)

This one is not-so-quaintly obsolescent, since it has that “little woman” condescension to it. It’s applicable only in that this wife not only reads fiction, she writes it. This brings me to another June milestone—the one-year anniversary of the publication of my novel When the de la Cruz Family Danced. A big thank-you to all who made it happen and to those who helped get it into readers’ hands. And endless appreciation to my readers.

Don’t forget your wife’s birthday. Even if she doesn’t want the whole world to know her age, she doesn’t like you to forget. (Section II. Personal Relations, page 10)

Actually, I don’t care who knows my age, though I have never been more conscious of my age than I am this year at 59. It means with the next birthday I begin my sixties, which sounds so much older than being in one’s fifties. The worst part is how quickly time flies—no, rushes by. Whooshes.

And now suddenly my older daughter turns 26 this month. How can that be possible when it was yesterday that I pushed her in a stroller at the lake near our house and she pointed to the sky and said cloud. Actually, she said cowed, but the intent was clear. It was one of her first words and I thought it brilliant of her.

If Mrs. Ebbutt’s advice missed the mark for my June milestones, it’s no reason to discount her wisdom for other occasions and circumstances. I leave you with this counsel from Section I. General Habits, page 5:

Don’t sharpen pencils all over the house as you walk about.