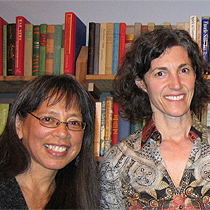 Meeting other writers is one of the pleasures of attending writing conferences. The pleasure is increased when those meetings, whether in-person or on-line, continue long after the conference ends.

One of the first writing workshops I attended was the Napa Valley Writers Conference in 2000. Participants are advised to have a car since lodging is spread over the valley, and none is within easy walking distance to the site where workshops are held. I didn’t have a car and was counting on hitching a ride to the workshops and readings. The person I happened to bum a ride with for much of the conference was Anne Germanacos who had driven from San Francisco where she lived when she wasn’t teaching in Crete at the school she and her husband had founded. She was gracious and funny and I felt an immediate connection to her. We weren’t in the same workshop—she was in a non-fiction workshop, and I was in Lynn Freed’s fiction workshop. I enjoyed the other students in my workshop, but it was Anne I hung out with. It was Anne who offered words of support after the injury to my ego at the end of the week.

At the outset, Freed told us in her appealing and erudite accent, “You didn’t pay your money for me to praise you.” And though we all nodded as if we were beyond needing praise, I’m sure we all were secretly disappointed that none would be forthcoming. Nonetheless, it was a great group—congenial and courteous—and we adored Freed, petite and attractive with wit and not a small measure of glamour. We loved her and wanted to be loved in return.

As it turned out, my story was scheduled to be critiqued on the last day of the conference, just hours before everyone would get in their cars and drive away to their regular lives. Also scheduled for the last day was the lone non-fiction writer in the room, a confident and articulate woman who was, it seemed to me, aware of her talent and skill.

Despite the moratorium on praise which had been declared at the beginning of the week, it was heaped upon this woman by students and Freed alike. It was a love fest—one that I couldn’t participate fully in since I was still smarting from the critique of my story.

Freed had called it “a flyover.” Something underdeveloped and cursory. Too brief and distant. Vague.

But if my piece was a flyover, so was the attention to the protocol that seemed to have been established at the start of the week. The criticisms were no longer sandwiched in gentle terms, but served open-faced with no dressing. I understood that everyone was tired. That it was time to go home. And if were words were not minced, my self-esteem was.

But in the end, it was good for me. Freed was right. I didn’t pay money to be praised, especially if I didn’t deserve it. So I came away from that conference with what I did pay for—ideas for improving my story and my writing in general. I came away with something else. A friendship. Anne and I kept in touch over the years by email, sharing news of our families, our jobs, the books we were reading, and the stories we were writing.

After Napa Valley, Anne started an MFA program at the Bennington Writing Seminars. I continued my own makeshift writing education, taking classes and workshops here and there looking for the secret to writing fiction.

Our first books were published within eight months of each other, her In the Time of the Girls in October 2010 and my When the de la Cruz Family Danced in June 2011.

Anne and I were supposed to be at the Port Townsend Writers Conference together this past week—a reunion of sorts. But a sudden illness prevented her from coming.

Centrum, the site of the Port Townsend Writers Conference, is a place I’ve come to love for the beach, the bluffs, the deer bounding through the grounds, the workshop faculty, the lectures and the readings, the opportunity for both solitude and social time, and this year the canoe landings of the 2011 Native Canoe Journey.

It would’ve been a treat to share the week with Anne. But there will be other times and places for us to reunite. I’m sure of it.